At before we has write about  ASSASSIN'S CREED BROTHERHOOD FACEBOOK GAME and on this page still discuss about it. I think it never lose idea to write some thing about assassin, so many people addict to this game since the first lunching.

For : Packed with content. Excellent story and presentation. Deep mythos to pick through

Against : Rome is no Venice. Almost requires that you be familiar with the earlier games

For a series that’s relatively young in video game years, Assassin’s Creed has grown in popularity faster than even Ubisoft could have hoped for. In an all too brutal industry, where most studios only get one shot at success, 2009’s Assassin’s Creed 2 was a rare chance at correcting the assorted foibles that kept the first game from being an instant classic. Having taken the time to spit-shine the core idea (an open world time shifting period action-adventure) they had with the initial release to near perfection over a two-year hiatus, it came as a surprise to everyone when Ubisoft announced a quick and dirty sequel due out only a year after the previous game. It was evident from the start that there wouldn’t be enough time to create a new character as deep as Altair or Ezio, or build a handful of cities that played host to intricately designed puzzles and a new set of real life personalities to guide you through your new adventure.

What Ubisoft did instead was reuse Ezio Auditore da Firenze, most of the supporting cast from the last game, and set the semi-sequel back in good old Italy (albeit in a new city - Rome). Yes, there’s just one city to tool around in, an absolute shocker to anyone who loved the variety that the first two games offered. The upside though, is a city that’s absolutely colossal in scale, and without loading screens and horse riding sessions across almost-empty countryside standing between you and your campaign progression. Unfortunately, Brotherhood’s Rome is also all but devoid of the varied character and scenery that the changing cities brought to the table. Consequently, you’ll find yourself switching to the full screen map more often than you used to because learning the city’s layout is much harder this time around.

You can also bring your horse inside city limits now, but what could have been a decent inclusion is rendered redundant with the removal of the gallop button. Hoofing it over rooftops makes a lot more sense than taking your horse for a Sunday stroll about town. The size of the city and the lack of load times also have a negative impact on game performance. There are framerate hiccups to suffer through, and instances of pop-up where soldiers appear out of nowhere and you suddenly have a fight on your hands at the most inopportune moment.

The excellent (as is now de rigueur for the series) story picks up right where the second game left off, and follows Ezio and Desmond on a quest to recover the Apple of Eden in the past as well as the present. After a memorable intro that sticks you right in the middle of a surprise assault on your villa in Monteriggioni, you’re bundled off to Rome, where you’re tasked with building a credible resistance against Borgia rule. Aside from Rodrigo Borgia, Brotherhood introduces us to Cesare and Lucrezia Borgia, two of the more interesting characters in the story and who share a rather interesting relationship. Cesare, in particular, is wonderfully acted and you’ll find yourself genuinely wanting to go after the guy, if only to see how soon he’d crack under the pressure. 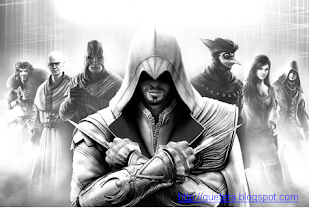 Characters from the last game, such as Da Vinci and Machiavelli return, and there’s also a subplot that introduces a gaggle of unfortunate French troops into the mix. You also now have the ability to leave the Animus (the device Desmond uses to relive Ezio’s memories) at any time, although there isn’t much point to it aside from having random conversations with your crew and the odd collectible to find. Present-day Monteriggioni is beautiful, however, and it’s a shame that more wasn’t done to expand on the story in the present day. More of Abstergo would also have been welcome, and although things do pick up towards the end, the developers could have thrown in a lot more than the odd inconsequential email to make you want to exit the Animus more often. It’s also worth pointing out that with a mythos and story as deep as this, you really should play through the earlier games to get the most out of Brotherhood.

While there aren’t any gameplay changes of note, aside from chaining kills during combat. Something you’ll immediately notice is just how packed the game’s map is. In addition to your usual memories, you’ll have Borgia towers to conquer, viewpoints to synchronise, treasure and collectibles to hunt, lairs guarded by the disciples of Romulus to raid, stealth missions from Da Vinci that end with you getting a hands-on with one of his over-the-top war machines, Subject 16 puzzles to decipher, shops to renovate, and monuments to purchase. Every renovated shop or acquired monument adds to an income that accrues at banks, which you can then collect and spend on more renovations or on better weapons and artwork for your assassin’s guild. There are also empty buildings that can be repurposed into factional headquarters with their own side-quests inside. With both a sizeable main campaign and a van-load of assorted tasks to keep you busy, a lack of content isn’t a complaint you’ll be voicing. The campaign missions can also now be replayed and there is some replay value in aiming for 100% synchronization in each of them.

The assassin’s guild also serves as home to the assassins you recruit during the campaign. Saving citizens from the wrath of Borgia guards lets you train them as assassins and pack them off on missions around Europe that vary in difficulty. Successful missions allow these assassins to level up and you can also use them during your game time, and at the press of a button, assassinate any marked target. Their use is also tied to a recharging meter, so you’re prevented from spamming them on every guard or target in the game. While they aren’t necessarily game changing, their presence does allude Ezio’s rise in stature and influence within the assassins.

Adding to the replayability is a set of multiplayer modes that surprisingly recreate the campaign’s tension and improvisation in an online arena. You’re basically given a target to kill, and you’ll need to make the hit while skillfully avoiding other players, one of whose task is to take you out. Aiding you are several active and passive abilities that let you blend into crowds or cloak yourself as another character model from the game world. There are also team-based modes to try out and a leveling system in place. It’s all very strategic and contemplative, and a nice change from the usual online frag-fests that you get with other games.

This is also one of those rare series where the developers place as much emphasis on the overarching story and depth of the universe as much as on gameplay. The biggest takeaway from Assassin’s Creed: Brotherhood, as from the earlier games, is the encyclopedic lengths gone to by Ubisoft’s writers to educate (a dirty word in the big bad world of video games) the player about Renaissance era locations, events and personalities as Ezio goes about assassinating unfortunate Templars. This depth, along with a map stuffed to the seams with collectibles and side quests, and a story with some of the most nuanced acting and direction in the medium, are what ultimately save it from the dreaded ‘cash-in’ tag.

While we used the Xbox 360 version of the game for our playthrough, we also had the opportunity to test out the PS3 version, and it's safe to say that regardless of your platform of preference, you're assured of an enjoyable gameplay experience. There were some instances like uneven framerates, screen tearing and texture pop-in, but again, this is common across both platforms. The only advantage the PS3 version has is the free, exclusive Copernicus Conspiracy downloadable content, which is a set of additional single-player missions.

This may not be Assassin’s Creed 3, but that shouldn’t deter you from picking this iteration of the series up. If you’ve played Assassin’s Creed 2 and absolutely must know what happens after the cliffhanger ending, you could do a lot worse than picking up Assassin's Creed Brotherhood.